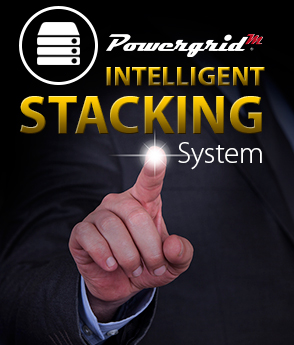 This stacking system is extremely small but packs a major punch with up to 12,000 watts in only 10U of rack space.

This capability allows the output waveforms of each connect unit to be combined or blended into a consolidated output power bus (RPIM or BackPlane) allowing the PowergridM stack to supply consolidated managed power services for the attached user equipment / load. When connected to the LBI bus, connected units communicate and function as a single power system with each unit supporting the stack on an equal and shared basis.

The PowergridM LBI supports the Load Balancing of the power demand and allows for the configuration of highly resilient or fully redundant power management services.

A significant advantage of the LBI Power Communications Bus is to provide for the integrated load balancing of demand loads with each LBI attached UPS unit providing its equal share of the load. The LBI communications bus is designed as a passive link with no Master/Slave relationships allowing a single UPS failure to have no operational effect on the other attached UPS units. If an LBI connected unit should fail or be taken off line, the remaining UPS units ramp up to re-balance the load until the failed unit is either restored of re-activated. This Intelligent Load Balancing Capability, coupled with PowergridM unique ability to accommodate demand surges up to two times rated capacity, enables a PowergridM stack or BackPlane System to be configured into a highly resilient or fully redundant Non-Stop power management system.

Coupled with the Integrated Power Management System’s (IPMS) Plug-&-Play Hot Swap BackPlane design, the passive LBI structure allows a failed unit to be removed from the system without affecting the provision of power services and with no operational disruption or down time. If a failure should occur, the remaining attached UPS units load share up to cover the load and notify the operator via SNMP status signaling of the failure. The operator simply removes the four front rail retaining screws and with a slight tug, removes the defective unit from the BackPlane stack without disrupting the power service. To replace the failed unit, the operator simply replaces the unit with a spare by inserting it into the vacated slot, replacing the four retaining screws, and within 20 seconds, the new unit will synchronize with the other BackPlane units, load sharing communications will re-balance the individual loads, and restore the BackPlane system to full operation. The Mean-Time-To-Repair (MTTR) of this repair/replace activity takes an average of 3 minutes with no operational system disruption.

As our world becomes more digital, PowergridM has designed the first intelligent staking system which allows you to stacked units and operate as a single power management system.

Call our Representatives today at 813-996-2583 or Contact us online for more information about the PowergridM Features Center. Our office is convenient located at Land O Lakes, Florida; and we are proud to serve the US Army and affiliates across the nation.